New and innovative farming methods that build resilience to climate change and protect a precious aquifer are being trialled by TAP. 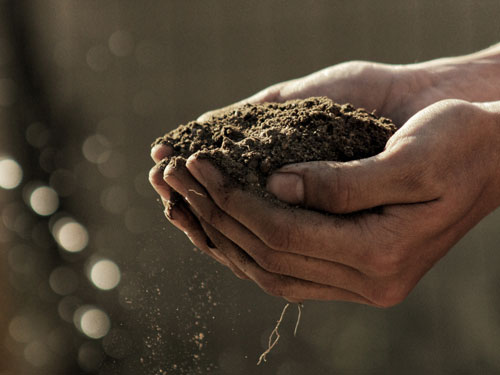 The Aquifer Partnership (TAP) is working with farmers on a series of trials led by Southern Water that look to prevent nitrates leaching into the groundwater beneath and strengthen the ecological profile of the land by improving soil quality. It comes as TAP, which launched earlier this year, is working to protect groundwater underneath the South Downs around Brighton that provides drinking water to 1.2m people.

Like many aquifers across the world, the groundwater is under increasing threat from rising nitrate levels from fertilisers, manure heaps and run-off from busy roads. The impact of climate change is compounding that threat as more heavy rainfall and droughts make the aquifer much more vulnerable to nitrate pollution.

One of the trials sees the farmer apply nitrogen fertiliser directly to the leaf of the crop – rather than the traditional granular fertiliser that is spread across the soil. Research has shown that around half of all artificial nitrogen applied to crops in traditional techniques escapes into the chalk rock beneath or is lost to the atmosphere. But, by applying to the leaf directly, the hope is that less nitrogen will be lost to leaching, reducing this 50 per cent significantly.

Meanwhile, another farm is trialling “regenerative grazing”, where livestock are allowed to graze more intensively for shorter periods. While the pasture is rested for longer periods, it’s allowing grasses and herbs to recover and building up the quality of the soil. Healthy soils, full of plant roots, invertebrates and microscopic life, are vital to reducing nitrate leaching and are also a major carbon capturer – one of the key ways to reduce global warming by taking carbon dioxide out of the atmosphere.

TAP is funding a number of farms as part of three-year trials and will then be evaluating the impact.

Alongside this, Southern Water is offering farm capital grants for machinery and fencing required for these trials, as well as incentivising nitrate reducing land management practices.

Aimee Felus, TAP Programme Delivery Manager, said: “There’s no doubt that farming is at a turning point in history and traditional land management practices that have been driven by policy and subsidies are being adapted to be more nature-friendly. We’re right at the start of that journey in the Brighton Chalk Block, but we’ve had some really encouraging results so far."

“We know climate change is increasing pressure on the aquifer. Droughts can concentrate pollution levels in the groundwater, while heavy downpours can strip away soils and significantly increase the amount of nitrates leaching into the chalk. However, working together with farmers we can increase our resilience."

“The clean drinking water of the South Downs has been a vital resource for decades and it’s our aim to make sure this continues for many years to come.”

Three of the farms involved in the initiative are: 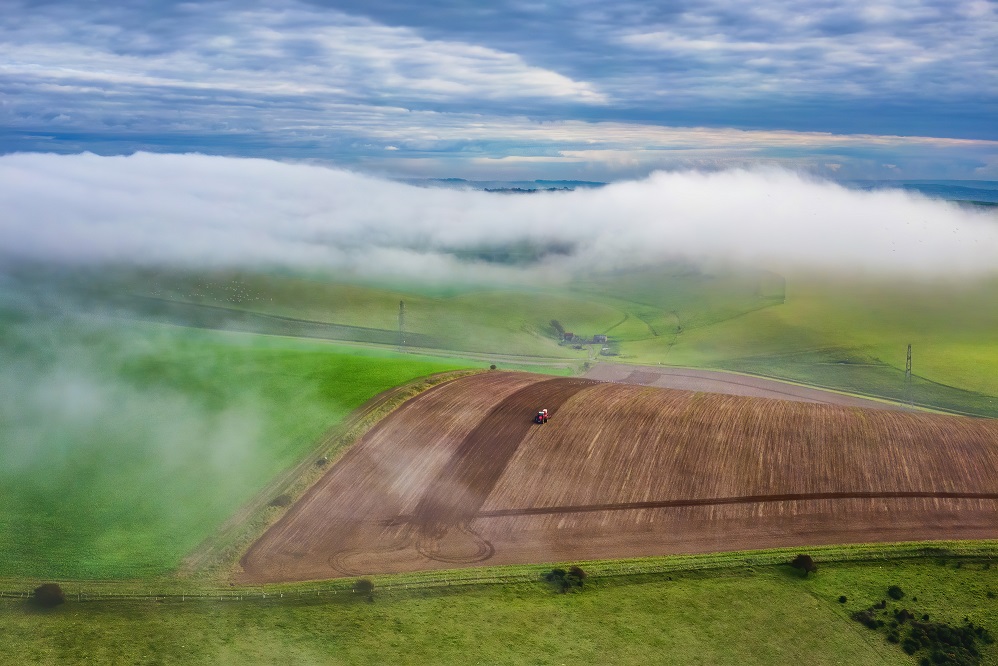 Managed by Farm Manager David Ellin for the BD Harris Farm Trust, the farm is trialling TAP’s “foliar N” initiative, where nitrogen is applied directly to the leaf. Traditional granular nitrogen fertiliser may only be 40 to 50% efficient, with the rest being lost through leaching or to the atmosphere. Nitrogen applied to the leaf of a crop may be closer to 100% efficient.

Further data is needed before making any big changes based on the results. If the foliar N is shown to be more cost effective in producing a crop, and benefits to the aquifer are clear, then David could look to use it more widely across the farm.

David said: “No farmer wants to be putting on more fertiliser than they need to. Working with TAP and Southern Water has been an opportunity to involve more science in the process, using enhanced monitoring like tissue analysis to really understand what’s happening over the growing season and identify potential improvements.” 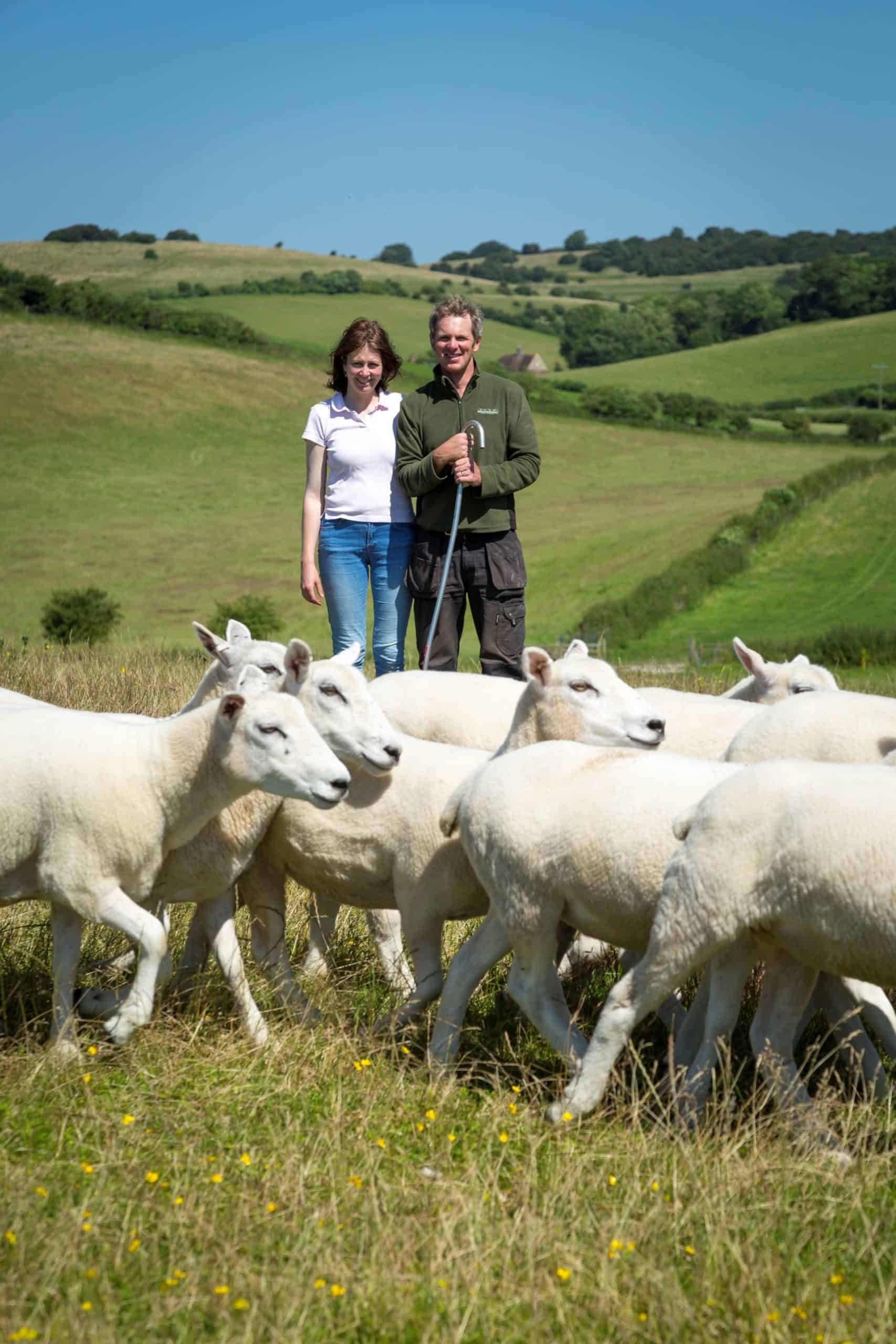 Saddlescombe Farm, near Brighton
This 182-hectare sheep and beef farm is around half permanent pasture with no inputs and the farm is at the start of a journey into a more regenerative farming system.

Farmed by National Trust tenants Camilla and Roly Puzey, approximately one third to half of the farm has temporary rye grass and clover leys. Camilla and Roly have found this seed mix is very dependent on nitrate fertiliser inputs for productivity and is not drought resilient. Sheep and cows graze the fields for extended periods, as is common practice, and this means that the grasses have a short recovery period which constantly puts the plants and their roots under pressure.

Camilla and Roly want to reduce or remove the need for inorganic fertilisers. The couple were inspired when they visited Rob Havard’s farm in Worcestershire where they saw regenerative grazing techniques. Livestock are allowed to graze more intensively for shorter periods, following which the pasture is rested for longer periods, allowing the grasses and herbs to recover. The increased forage not only covers and protects the soil but also promotes greater root growth, helping the plant be more drought resilient. This system also increases organic matter in the soil, stores carbon, improves flood tolerance, makes the farm more resilient to climate change, and reduces the need for inputs by promoting soil biology and nutrient cycling.

As part of the change in the farming system Camilla and Roly want to reduce sheep numbers and increase cattle numbers. Cattle grazing behaviour is better suited to this system as they are less selective grazers than sheep. More herbal leys will also be established to replace some of the ryegrass and clover leys.

A comprehensive soil analysis will be taken to establish a baseline. This includes a worm count, infiltration test, soil structure examination and a soil analysis (the Albrecht test). This will be repeated in three years to monitor change.

Roly said: “We are already seeing the benefits. If we hadn't started to implement the system this year we would be struggling to find enough food for our animals due to the lack of rain we have had this summer.”

Bevendean Farm, near Brighton
This 324-hectare farm is mixed arable and livestock, roughly half in arable rotation and half in grass.

In this trial, nitrogen fertiliser across four plots is reduced by 5%, 10%, 15% and 20%. The yield and grain quality, as well as the varying cost of inputs, are monitored across the plots and compared with the ‘normal’ level of fertiliser. TAP is also measuring residual soil nitrogen levels after harvest and monitoring nitrate leaching over the winter using porous pots. The results of the trial in year 1 are inconclusive but the trial is being repeated to provide some more robust data.

This was a first step towards reducing nitrogen inputs across the farm in the long-term. As a commercial farm, reducing the cost of inputs can improve the profit margin and the scientific approach taken by TAP is allowing Stuart to take stock and review his fertiliser inputs.

Rather than pushing the crop with more nitrogen fertiliser, Stuart is considering moving to a lower input / lower output system. The early results of this trial show that this approach could be more economically and environmentally sustainable in the long-run.

The first year of the trial showed the cost of producing wheat (cost of inputs vs return on yield) was virtually the same when applying up to 15% less nitrogen fertiliser than normal.

The farm is also using winter cover crops where possible. Having a cover crop incorporates a better quality of organic matter back into the soil, catches excess nitrates and helps to prevent soil erosion, which can be a problem on the hills of the South Downs.
If the results of the nitrogen reduction trial continue to show that wheat can be grown with lower inputs but an equal or greater economic return, Stuart will consider rolling this out more widely across the farm.

“Given the importance of the aquifer and the need to make farming more sustainable, this is serious food for thought. Are all these inputs needed? Can I save money? Can I improve the soil?”